Summer in the Capital

Make the most of your day out, especially when the sun shines!

2FOR1 Royal Botanic Gardens, Kew is one of the most impressive of London's green spaces. 300 acres of beautiful landscaped garden, glasshouse and the Xstrata Treetop Walkway to experience the wonder of the sights at canopy level.

Hyde Park is a well-loved destination: wander in the gorgeous Rose Garden, and soak up the lively debates at Speaker's Corner. Nearby attractions include the Victoria and Albert Museum, Natural History Museum and Science Museum, which includes 2FOR1 IMAX 3D Cinema and 2FOR1 Fly with the Red Arrows experience.

Regent's Park is the most manicured of the Royal Parks, and rightly known as the 'jewel in the crown'. 2FOR1 ZSL London Zoo is within the park, and includes the new, magnificent, Tiger Territory.

Green Park has stretches of lawn with deckchairs for hire for picnics and calm. Nearby 2FOR1s include Ripley's Believe It or Not! London, 2FOR1 Wellington Arch and 2FOR1 Apsley House (the latter two are also near to Hyde Park, depending on your location!)

St James's Park is a stroll from Trafalgar square and National Portrait Gallery. The park is surrounded by three palaces, the most iconic being Buckingham Palace.

Bushy Park features a mixture of woods, gardens, ponds and grassland. While you're there, visit 2FOR1 Hampton Court Palace: experience Henry VIII's pleasure palace, and get lost in the famous maze.

Greenwich Park is another outer London delight, and hosts the Prime Meridian Line and Greenwich Royal Observatory, as well as the National Maritime Museum.

Richmond Park is the largest of the capital's eight Royal Parks and is a National Nature Reserve. Visit 2FOR1 Twickenham World Rugby Museum & Stadium Tour, but check your location before setting out, otherwise you may be in for a long walk in the park!

London also has a great selection of city farms which are free to enter, including Spitalfields City Farm.

Don't forget the 2FOR1 theme park deals available when you travel by train, all listed in our animal antics and theme park adventures feature article 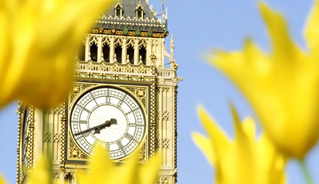 Spring into the City

The fastest and most frequent fleet on the river, link London's attractions so you can experience everything the city has to offer.